A series about the ways I work towards being cognizant through decisions that make me more mentally engaged with various facets of my day-to-day life.

—-
It’s that time of year when small talk turns to the question, “So, did you come up with any new year resolutions?”

I like this time of year, because people often take some time think about themselves in a positive way, or at least with a growth mindset:

(That last one was a joke, of course.)

While I do love goal-setting – a post on that is upcoming – I am not personally a fan of New Year’s Resolutions due to the way that they are typically approached by the goal setter. 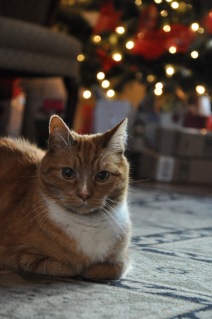 “Why, Katie, would you not support one’s desire to make positive changes?” asked Seriously Irrelevant Holiday Cat.
Well, the thing is, I think that setting a goal with such a specific start date and not creating measurable steps to achieve it can be a dangerous activity, at least by way of achieving your goal and feeling confident in yourself.
New Year’s resolutions often involve making a significant change right away at the beginning of the year, on the first day, and making that your new standard to meet (e.g., no more candy, or 30 minutes on the treadmill three times per week). This, in my eyes, is a recipe for disaster, for a number of reasons.
Firstly, you are not easing into your goal.
You may be introducing a change in your life without gradually doing so, and this can make it difficult to stick to in the long-run (or even the short-run). If you choose to go with a 30-minute treadmill jog for the new year, you might find that it is incredibly difficult to accomplish this even once if you are not regularly doing something in this realm already. It can be disheartening to feel that your goal is not accomplishable because you were unable to achieve it right away. Creating a plan that involves building up to your goal over time using baby steps is a more sure-fire way to eventually attain a specific goal with a measurable outcome.

Secondly, you have decided to start achieving this goal regularly on a particular date.
It’s great to set a deadline for yourself to begin working on a goal, but if your goal is lofty or something you are not accustomed to, you might find that once your deadline has passed… the motivation to pursue the resolution has also passed. Setting a deadline to begin working towards a goal is a better idea, rather than setting a deadline to begin achieving this goal on the regular. Reframing your thinking to, “Over the course of this year, I hope to work towards X,” is more powerful than, “Tomorrow I am going to begin regularly achieving X.”

Thirdly, your goal may be based on a perceived defect in yourself.
I am particularly wary of any resolutions that involve appearance, such as losing X number of pounds, getting a six-pack of abs, or attaining a size 0 in clothing (for women’s clothing, because apparently women should aspire to be nothing). These goals will lead to a sense of failure or incompetence if you are unable to achieve them and are based on physical attributes that may be outside of your control, which is a sign that you should not set the goals with this sort of language (or perhaps avoid setting these goals at all). If your appearance is going to be a part of your resolution at all, the goal itself should be within your control (such as healthy eating and exercise), whereas a change in appearance may be a by-product of that goal (such as increased muscle tone or loss of unhealthy fat). Further, any goals that are attempts to improve yourself for others? Make sure that you setting goals for yourself and that you are intrinsically motivated* to achieve them in the long-term.

If you are making New Year’s Resolutions this year, consider these three common barriers to achieving goals that you set for yourself and take the time to make a plan of attack for eventually succeeding in making the changes that you want to see in your world.