Each year, the Vancouver Hot Chocolate Festival brings together cafes, confectionaries, and restaurants to create specialty hot chocolate beverages to fundraise for a great cause. This year, proceeds of the festival will be going towards supporting the Downtown Eastside Women’s Job Training Program of the PHS Community Services Society and East Van Roasters. Each year, I join this win-win-win situation by dropping in to every possible location, tasting delicious drinks and snacks, reviewing my stops, and supporting this superb cause. 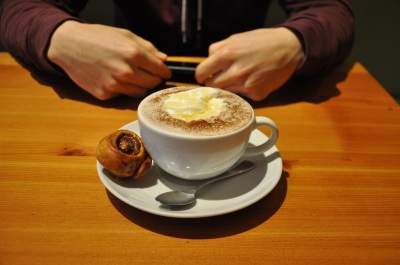 
This almond-milk breakfast cocoa (not really, but I had it at breakfast time, so… It is now!) from Terra Breads is blended with chilli honey, and the kick in the back of my mouth was immediately noticeable! Not one to usually enjoy something with a spice to it, I was surprised to drink it comfortably – the honey definitely helped, along with the whipped cream on top. Dark chocolate made this cocoa feel more appropriate for breakfast, especially with the lighter almond milk flavour. A small cinnamon sugar brioche came alongside the drink and helped calm my spice-sensitive tastebuds with its delicious sweetness – fresh like a miniature morning cinnamon bun! 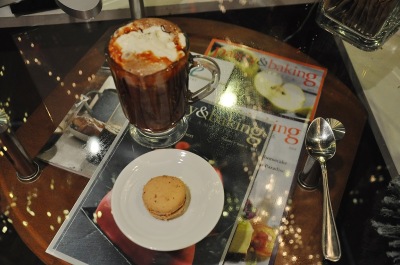 Tuesday evening found me at Koko Monk, ordering their weekly festival flavour that is characterized by middle eastern flavours. All of the flavour in Koko Monk confections, baked goods, and drinks come directly from the ingredients used, which do not include any artificial flavours.

This drink was made with almond milk and I felt excited about the “salted rose caramel” that was listed as a component of it. When the drink was handed over, the caramel was oozing over the edge of the glass and one lick told me it was a most splendid flavour. However, the most distinct flavour in this cocoa was the Turkish coffee, and discovering that this was a large component of the drink at 7:00pm was somewhat of a concern, since Turkish coffee is intense!
For me, this drink didn’t quite hit the mark, but that is likely in large part due to my general avoidance of coffee! I’ve always been impressed by the flavours at Koko Monk, and I look forward to trying one of the next weeks’ flavours. However, this dark and coffee-filled drink wasn’t the right match for me. The hazelnut macaron on the side, though? That was a piece of edible artistry. All of the goodies on the side of their festival flavours I have tried have been delicious, and you can select any macaron you desire for this year’s festival treat.

With a freer afternoon on hand, I was able to use a weekday to head out to one of my traditionally favourite stops for the festival – East Van Roasters! Not only have they always impressed with taste, but they are working towards a good cause and are receiving a percentage of the proceeds for this year’s festival.

On the recommendation of the woman taking my order, I took my Buzzzzz cocoa with soy milk. This drink was described as containing Hives For Humanity honey and bee pollen (!), and that sweetness was evident, but not overstated when I began to sip away at the deliciously foamy, chocolaty beverage. I loooved this flavour! It had an interesting texture, that may be due in part to either the soy milk or the pollen or both… Whatever it was, it was good.

It was thick in mouthfeel and not too sweet taste-wise, and came with a honey financier (which, apparently, is a French cake that resembles a sponge cake and is usually made with almond flour or ground almonds). The financier tasted so so good – I thought it was banana bread at first, but it was spongier than that, and certainly not large enough to satisfy my desire for it after I had one bite. 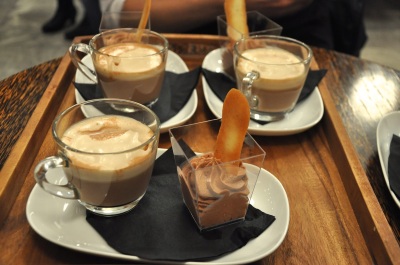 Finally, on Friday evening, I made my way with CC, MS, and PS to Thierry! We caught them on the last day of their first secret festival flavour, Milk & Coffee. Those words pretty much capture the drink in its entirety…

As someone who avoids dairy drinks, this was not a super enjoyable drink for me! I like the concept of the espresso whipped cream, but combining that with a dairy chocolate base was too much. Unfortunately, this speciality chocolate drink did not live up to the standard of taste I had anticipated for a milk chocolate cocoa from a speciality chocolate location. The taste was described by my comrades as “slightly watered-down liquid butter”, which isn’t the most appealing of tastes as you may imagine.

The dark chocolate mousse on the side was delicious, as well as the crispy sugar cookie that accompanied it; however, I left feeling a little let down after previously positive festival experiences. It would be nice to return and try one of the next secret flavours.