Last year, my mom and I shared DAVIDsTEA’s 24 Days of Tea journey together. This year, my mom is too far away to share the same tin each day with me, so I had to go it alone this time around!

Join me for a cup of tea? 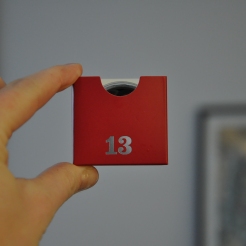 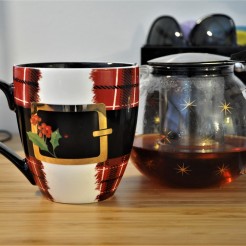 This chunk of the advent calendar really relaxed on the caffeine! I also (obviously) relaxed on my steady hand for photos, as you may notice.

Day 13 was oh-so good! I already am openly and deeply fond of rooibos teas, and chai and cinnamon are so good on their own – to combine all three of these things? It was beautiful. I like having a caffeine-free chai option for the evenings, as it is a very warm and relaxing flavour, and I think cinnamon might be good for the soul, so adding some sugar and milk or even making a tea latte out of this would be sublime.

I snagged this tea on a super-sale during the summer and hadn’t returned to it for awhile, so I was pleased to find myself with a renewed opportunity to!

Its oolong-y nature means that it has the bitterness of black and green teas, but the flower blossoms, lemongrass, lemon peel, and pound cake additions meant that it had a sweet and earthy kind of taste. Like a cake that grew on a plant, rather than being baked in the oven. 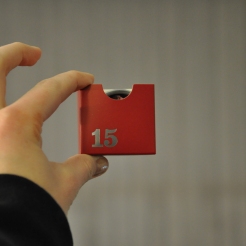 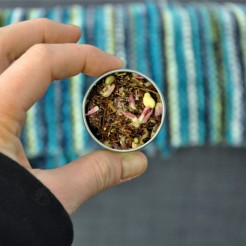 I think it is obvious that this is a delicious flavour, and it is a rooibos so you know that I’m going to like it even more. Or will I? Apparently, the rooibos in this tea is a green rooibos, which (according to my research) is more expensive to produce and is generally less in-demand than its naturally sweeter and less earthy red counterpart.

Nonetheless, I found this tea enjoyable, and whatever “unsweet” flavours the green rooibos provided, they were nullified by the raspberries and white chocolate bits mixed into it. 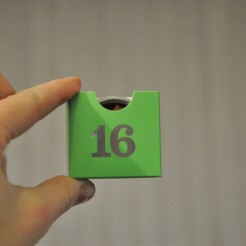 A holiday classic for DAVIDsTEA – one that I actually hadn’t tried before!

I was surprised to find that it was a fruit infusion; I suppose that I imagined a black tea with peppermint or cranberries or something. However, it was full of ingredients like apple, hibiscus, pineapple, papaya,  beetroot, cinnamon, and other naturally-occurring goodies! The appearance of the tea mixture itself was quite a sight to behold with its chunks of cinnamon sticks and the colour of the tea was rosy from beetroot. It was delicious on its own or with a bit of sweetness added!

Again, I was surprised by this tea being a fruit infusion, as “shortbread” sounds like some sort of full and milky/buttery/sugary treat and an herbal tea sounds like a light, refreshing drink. It turned out to be a lovely evening drink during some cold Toronto weather, and was nice with some sweetner to round out its earthy, nutty flavours. Some interesting ingredients I enjoyed were raisins, elderberries, willow bark, and sour cherries! Although, I do think this would be good as a rooibos…

I was quite excited when I saw this one coming up in the calendar – I had a very early morning for work and a long day of travel ahead of me in bad weather. This black tea was going to be a most excellent treat to start off my day – I was by myself but audibly cheered when I sipped it. Earl grey is one of my go-to teas, especially for grey and cold days, and I’ve tried many varieties – unfortunately, this infamous DAVIDsTEA flavour was not among them! Until Day 18. Ah, yes, with some sugar and cashew milk, I was happily sipping away as I walked to work at 5:30am, warm on the inside from a truly creamy version of one of my favourite teas.

Thanks for re-joining after the holiday break! I hope you’ll stick around for the next and final sample of teas before the big day.