Each year, I endeavor to consume one pumpkin thing per day for the month of October. This is my 7th annual Pumpkin Challenge – welcome!

We took a wander down to a new spot for me in the city: Eva’s Original Chimney! This establishment has an abundance of exciting flavours, including vegan ones! While this one was not veganized, it was delicious (if not stomach-ache inducing). Pieces of pumpkin pie cheesecake on white ganache soft serve with praline bits throughout. Definitely worth the trip! I’ll be going back for their vegan options.

Breakfast was all about pumpkin this morning! My toast was covered in pumpkin seed butter and jam and my tea was sweetened with pumpkin honey. The butter was super thick but not especially salty like your average nut butter, but still flavourful! It also went well with baking recipes I made later on in the month!

This delicious little treat was part one of pumpkin found at the Vegan Oktoberfest in Toronto! What a strange and fun evening with delicious, vegan food in abundance. Topped with fruit and coconut whipped cream, this ice cream was pumpkin-spicy and a great dessert to a yummy dinner!

This was one of my favourite items from the evening – pumpkin spice kombucha! Its rim was pumpkin spice flavoured and sweet, and the kombucha itself was mixed with rum and quite delicious in its own right! 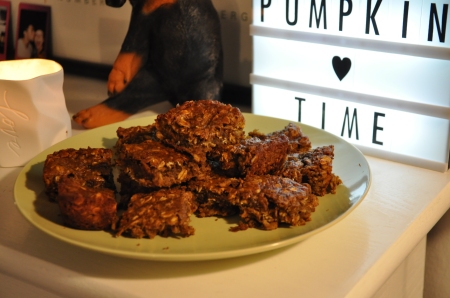 The photo might not look pretty, but these squares tasted really good! They were chewy and full of texture from the oats and the pumpkin spices kept each bite exciting! I would, as per my usual taste, probably add chocolate chips if I made them again… For some pizazz.

While I was underwhelmed by the customer service in this establishment, its production of amazingly delicious and vegan baked goods will keep me going back! This pumpkin pie muffin topped with vegan creamy frosting was delicious once it had warmed to room temperature and revealed its creamy center – not advertised! We also enjoyed a very cute and miniature cinnamon bun that was even smaller than this muffin – truly the perfect size for a cinnamon bun.

Stick around for more pumpkin items in the latter half of my pumpkin journey!